Back in 1956, Mr. Miller purchased this F250 stake bed for his fledgling vending machine business. It was his work truck through and through, set up with signage and a hydraulic lift gate to assist in getting the cigarette and soda machines delivered to their perspective sites.

As the years went by, the truck was very well cared for and he started taking it to local car shows. It was at a local show as late as 2015. However, the old fellow who owned it was 94 and the show was the only time the truck got out in 2015.

In the early 70's, he decided to take the Ford out the work rotation and he purchased a couple of other vehicles for the fleet. The 56 Ford came off the road and underwent a bit of a restoration. He and his loving wife repainted the truck together and while that was underway, he pulled and rebuilt the original motor. With his newly painted and rebuilt truck, he continued going to shows.

As the chap grew older the truck stayed in the warehouse more and more. Unfortunately, just recently, he passed away. The truck found sitting in his warehouse (along with the step van and the blue 73 Chevy also featured here on the AutoArcheologist site).

I heard about this stash and with some little digging, rec'd all the info and was able to get the trucks photographed. Shortly thereafter, they were posted for sale and even featured on Barn Finds, which increased traffic here to this site significantly and due to that, a buyer was found rather quickly for this beauty.

He came to see her and fell in love (he has a couple of other older trucks as well), made an offer and left a deposit. Several days later came back and picked her up. The truck fired right up and he chose to drive her home. The trip was about 60 miles and he reports it was filled with adventure as the older gas started gumming up the works and causing some issues as he drove and the brakes would randomly pull to one side or another on each application of the pedal. She made it home though and is currently receiving the help she needs to remain a ready cruiser.

The new owner says she has found her forever home!

This Mustang was purchased in 1968 by the first owner and very promptly, he and his new wife went on their honeymoon.

The second owner of the car also took it on his honeymoon and when the last owner purchased the car in the early 70's, he and his wife also used the car to head out on their honeymoon.

The Mustang came originally equipped as a 390 GT , with PS, PB, the ralley gauge cluster and several other options.

As the years passed and the car was driven daily in New England, the unit body started getting much worse for wear.

Being a staunch NASCAR modified series fan, the owner of the car figured he didn't have the money to put into a full on restoration of the car, but did feel that he and his good friend could buy some steel and weld up a Late Sportsman series chassis. They started on the chassis and then got to trimming all the sheet metal from the rusted pony.

They draped it over the chassis and as things always seem to happen, things stopped happening. Family, Life, Kids, Home, Job... all those semi-important things...LOL

The car moved around with the last owner and his family, with the thought he would eventually finish it. Most of us know how that goes.

I stumbled across the car as I was driving by and saw the distinct shape of a Mustang fastback hiding under a tarp behind their garage. I knocked on their door and spoke with the husband. He said he's think about whether he was going to sell it. (BTW, the house was up for sale). later that day, I rec'd a call from him. His wife who is a spiritualist, said, are you crazy!?, this is a sign that we need to sell the car in order to sell the house. She had also been just meditating on getting the house and the car sold... and there I was...

I posted the car for sale and within 24 hours, I had 15+/- people interested in the car. Two days from posting, the car sold for full asking price to the second person to contact me and was headed north to MA where the remaining body was going to be used to save another Mustang and it was rumored that the NASCAR chassis was going to be cleaned up and used for some local vintage racing.

Shortly thereafter, the family rec'd interest from several people in purchasing their home. 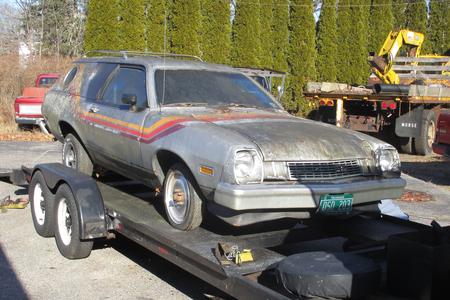 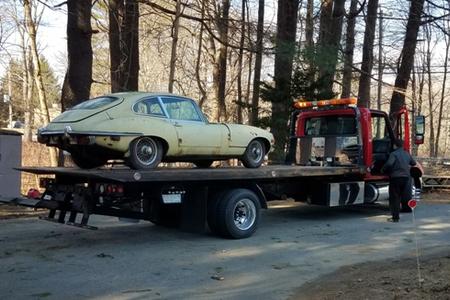 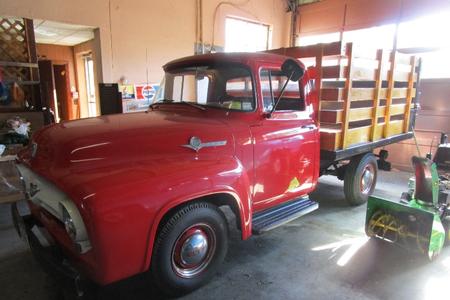 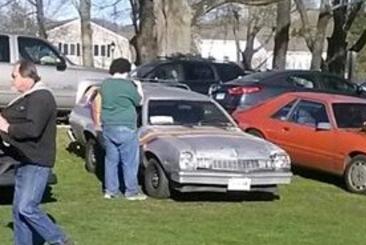 The Pinto Cruising Wagon was the hip and cool thing to drive in 1977. It matched the Ford Cruising Van with similar stripes, portal window, blanked out sides and carpeted interior.

Back in the mid 80's, the previous owners of this wonderful little Pinto broke down while traveling in CT, from VT. With the fact that the mini van/wagon needed more than they could afford, the car was abandoned at the service station and eventually ended up in the back lot of the station, in the woods. The little Pinto Cruising Wagon sat forgotten for years, but at least she wasn't lonely, there were quite a few other forgotten souls with her.

After many years of sitting, the owners of the service station decided it was time to clear out the back lot.

They enlisted the aid of the AutoArcheologist to get these projects moved on to new owners.   The first person who showed up to see the Pinto is a Pinto expert and enthusiast and promptly made a deal on the colorful little car. He towed the non-running wagon home and quickly went to work on her. Several weeks later I rec'd a photo of the little car out and about getting gas. Several days later I rec'd a photo of the car at an all Ford car show and was told that despite a finish that was bit worn, she was one of the stars of the show. One simply does not see these cars around anymore.

This old Cat story is similar to many barn/yard/garage/field finds.

This Jaguar was inherited by what we think was the second or third owner of the car from a close cousin in CT. He drove the car home to MA and immediately started looking into parts sources for her, as evidenced by quotes, price lists and catalogues found among papers in the car.

Unfortunately, he became ill and all work stopped on the car. Not that it needed a whole lot at that point. The car sat. Several years went by and the illness finally took him.

His wife inherited the house, car, belongings, etc. However, having dealt with this massive loss, she felt out of place in the house and with his stuff, so she sold it all over to her step daughter, her husband's own daughter.

His daughter knew of the car but didn't know anything about it.. didn't even know she now owned a Jaguar coupe.

As she and her fiance remodeled the home, the Jaguar continued to sit out side, under a tarp and under some elarge pine trees. Finally, possibly 12-15 years after it was finally parked, she pulled the tarp and said let's find out what this old car is and get rid of it. maybe it's worth something.

She contacted me and I headed out to northeast MA to do the photoshoot. We cleaned her up a bit and set to photographing her.

There is an old addage about the early bird getting the worm. Someone who regularly deals with me from out of state had just recently asked about any older Jags. I mentioned the 2+2 I had just photographed. He was interested. Within a week a deal was made, before even being fully listed.

The great part of the story is that the money gleaned from the sale will pay for her wedding. She had tears in her eyes (maybe they were in mine...) when she said that this would be her Dad's way of helping her with her wedding.

This 73 Chevy P30 Step Van is part of the same story as above and was found in the same warehouse after the owner passed away at the age of 94.He was still actively toying around with these vehicles not too long before he passed.

This all aluminum bodied step van was part of the vending machine fleet and was generally used as his repair truck, hauling parts out to sites to fix the machines. When sold, she fired right up and we drove her out to the awaiting flatbed truck.

The first truck to be featured on Barn Finds, I rec'd several offers and then one from Richard Rawlings of Gas Monkey fame, that was actually a hair higher than the asking price.

I guess, being from Texas, they move at a different pace than we do here, but after a couple of weeks of rather subdued phone calls and emails, the deal was closed and the truck was picked up and was west bound and down, towards its new home in Texas.

I will most assuredly be keeping an eye on the Fast n Loud series to see if she makes an appearance. I'll let you all know if and when.

UPDATE: I rec'd an email from the producer of Fast N Loud to tell me that they have chosen to do a full feature build on the step van for the 2017 season, to be aired in the next new season.

That is how this story begins. The owner of this great little British car went out to purchase a headlight for his Crown Vic about 15+ years ago. While at the parts place, which also sold used cars, he said, "Ya know, if you ever get any small British sports cars in, give me a call, as I'd be interested." The owner of the parts place said, "Hold on just a few" and within 10 mins, he rolled up in the pictured white 1980 Triumph TR7.

The owner drove the car quite a bit during his first few years of ownership, but as time went on, he didn't seem to have the time to enjoy her the way he originally did.

After several years of registering and insuring the car but really only moving her from one part of the yard to another or in and out of the garage, he decided it was time to move her on to someone who would enjoy her.

Having recently connected on LinkedIn for our day jobs, the owner remembered that I also did some car stuff and went back to my site to see if I could assist... Of course I could.

The little car was photgraphed and posted to several web sites. One of the first people to inquire about the car loved the fact she had an auto transmission, generally a turn off/black mark against a small British sports car.

This person already owneed several other TR7's and has a soft place in his heart for them. After a little while of bids back and forth, some changed minds, other people seeing the car, a price was agreed upon and the person who wanted her becasue of her "deficciency" purchased her. She is seen here loaded up and headed to her new home in MA.

A quote from the owner: " Thanks David! The little car is in a much better place now. I know I never would have sold it (and probably would have junked it) without your help. Thanks again!" 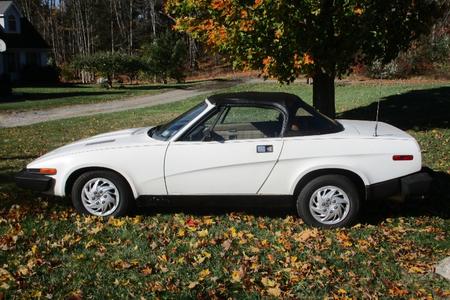 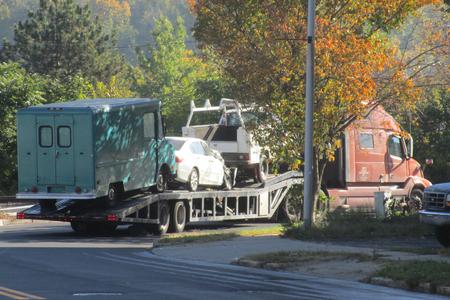 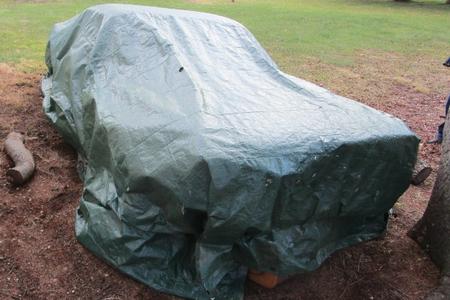 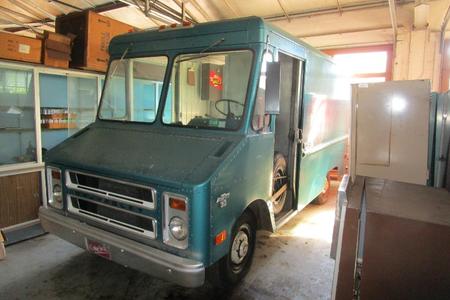 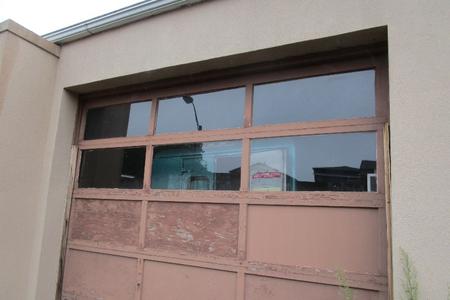 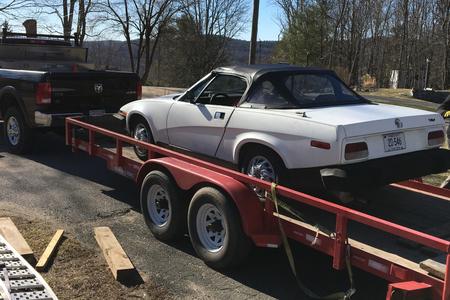 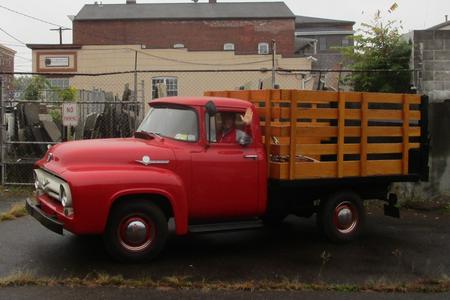 Article on the AutoArcheologist in the local magazine 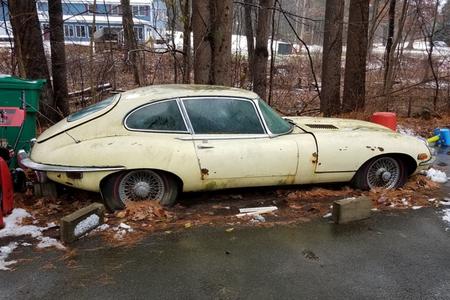 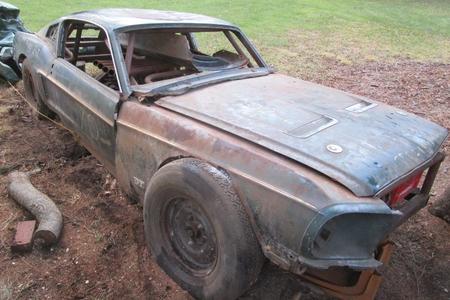